‘Cheshire Cats don’t exist,’ I try desperately to explain to Maggie as she lies awake on my arm almost three hours past her bedtime, ‘they’re just made up characters. Like Superman or, I dunno, Peppa Pig,’ I say. But even despite my claims, it seems impossible to convince her otherwise.

‘The Cheshire Cat is real,’ Maggie tells me another time, gripping on my hand, ‘I know he is ’cause I see him all the time. I can even prove it to you.’

She looks cross. Although, it’s difficult to take anything she says too seriously when she’s got spaghetti juice on her pyjama top and wisps of hair all over her face, even if she is using that grown-up voice of hers. And secretly, because I’m intrigued to see how she’ll try to prove it to me, I let her continue. She closes her eyes and begins, ‘OK, he’s really fat, right, then he’s got these big round eyes and super long arms, and he hangs from a tree-branch or something.’

It sounds like she’s describing a monkey, not a cat, and I laugh to myself. I reckon Geoff would’ve probably found this funny, too. I reckon he’d have smiled secretly for me whilst keeping a straight face for Maggie, just like he used to. I consider texting him with a little anecdote to remind him of us and, for a moment, I have some vain hope that it might prompt him to think of times we’d smiled together at bedtime, maybe he’ll even wonder why he’s not here. I swipe my phone to check my unchanged screen and then I imagine his silence. I’ll be breaking the three-day mark of no contact if I do and I can already picture how embarrassed I’ll be when he doesn’t reply again. I decide to hold off and listen to Maggie some more instead.

‘Alright, so, he’s upside down then, this monkey cat?’ She laughs at me with her eyes still squeezed tight, ‘Nooo, he’s lying with his belly down like Toby and his legs’is up in the air.’

I can imagine this fat cat now. I can see him in a hammock made of his own body, his long arms, and it starts to spook me out a bit.

‘Let me get this right then, he’s a purple cat with a grin on his face?’ I ask.

‘Nooooo,’ she tells me, angrily now, as if she’s explained it to me a thousand times before, ‘Well, maybe he does smile a bit, sort of, but not really. But I don’t know the colour what he is.’

‘Maggie, he’s just a normal cat then, isn’t he? Because if he doesn’t have a grin like the Cheshire Cat, and he’s not purple like the Cheshire Cat, how could he be any different from, let’s say, Nanny’s cat, Toby?’ I reply. She lifts her head up. She seems even more exasperated and she’s talking as if she’s the adult trying to explain something to a child, ‘Because, Mommy, he’s THE Cheshire Cat and that’s that,’ she says before slamming her head back onto the pillow to rest her case.

At this stage, I don’t really know where to go with it anymore. I want to tell her that he exists in different versions of stories, and pictures and other things, only I end up confusing myself with it all. I unwillingly side with her,

‘When d’you see this Cheshire Cat then, Mags?’

‘Mostly at night time when I’m ’bout to sleep. No actually, he comes in the mornings ‘swell. He mostly just hangs there talking with his lips still, but, but then sometimes he shows me cartoons, too.’ she answers.

Maggie would’ve usually given in by now. Yet tonight, for some reason, she seems determined to convince me that I’m wrong. I try to wind the mood down a little more,

‘Alright then, look. Maybe you could enjoy one of these cartoons as you drift off. It’s getting late and you remember what we said about more sleep?’ She agrees to it, reluctantly, but only so long as I stay for a while to watch some of the cartoon, which I also agree to, half-begrudgingly.

‘OK. Now, Mommy. Close your eyes, I like to sqinch mine tight but you can still see him if you don’t,’ we both lie with our eyes squinched and her head feels good on my arm, ‘I can see him now, what about you?’ she asks. And with one eye open I can just make out her smile so I reply, ‘Maybe a little, actually yeah, I can see him now and his funny monkey arms.’

‘Told you,’ she mumbles under her breath as she slips off to sleep.

But I lie. All I see is white noise.

This conversation’s getting tiresome and I could quite easily fall asleep with her like this, but I’ve got things to do, important things like scrubbing the hardened spaghetti off the pans on the side and I can see that her imagination’s getting wild, too. She’s obviously becoming obsessive over this cat and I probably shouldn’t be encouraging it. She’s had these obsessions before, fixations with characters from books and films, and sometimes she can get worked up about them.

Of course, it was the usual death questions that came first. Then she had a moderate dose of childlike existentialism about the stars in the sky and questions about God or whatever, but it was never anything too out of the ordinary for a kid with her imagination. Though just recently, she’s started to get a bit too obsessed with stuff and not sleeping properly, and Mrs Moreton happened to mention that her work’s suffering, a bit like my own. Then, I’ve not been sleeping much either, so it’s been difficult to handle Maggie and her questions, especially when a lot of them are about Geoff. I need her to sleep tonight.

I turn out her light. I go downstairs to the lonely rooms of the house and the dishes stress me out straight away. I decide to screw it and fetch a bottle of wine from the rack instead where I notice one of Geoff’s unfinished bottles of Malbec waiting there, and I wonder if he’ll ever come back to drink it. I feel heavy as I replay that perfectly normal moment on the sofa, just the two of us, and then the next moment and everything that followed his insensitively clichéd words, ‘We need to talk.’

I choose a bottle of white and go out to sit on my patio. There’s a slight June breeze so I wrap my Mother’s knitted blanket around my shoulders, and before I can see anything around me, I open my laptop. I can’t resist scrolling again through the pictures of Geoff at his office party left there from my earlier binge. In the picture I hate the most, he’s smiling because his tie’s been knotted around his head and he looks as if he’s got pink lipstick on the sleeve of his white shirt. He doesn’t look sad. He certainly doesn’t look as if he’s looking at pictures of me. I check my phone another time, it’s been ten minutes since I last checked and there’s still nothing.

I cry out, involuntarily, all the sadness that I’ve been hiding from Maggie today, but still I’m conscious not to be too loud. I don’t want her to find me crying again. I think of her silly story and for a moment it gives me temporary relief, it allows me to focus onto something else, anything else. I think of the cat in a hammock made from his own body and I wonder. The cat itself doesn’t confuse me, not necessarily, but it’s the length of the arms that troubles me, I imagine his impatient arms to be drooping and stretching with a heaviness in his weighted body, as though he’s been carrying it for a long time. I minimise the photos of Geoff once I’ve scrutinised the smudges on his shirt one final time, and as the image begins to blur, I conclude that it definitely is lipstick.

I open a new tab and this time I search for the Cheshire Cat to remind myself of what he looks like. In most of the pictures he’s purple with black dagger spikes on his body, but of course, he always has that same grin. I think of what Maggie said about him not smiling. The Cheshire Cat always has his smile, so I try to picture him without it, and I can, in fact, I can see him clearly with a stern look on his face. How can I see this if he doesn’t exist? I’m spooked out again. I read a little into his Wikipedia bio and I learn that in the story of Alice in Wonderland he functions as a guide to Alice’s final destination, the tea party, and I wonder what my journey would be if I were Alice. After a while, I settle on happiness.

I close down my laptop, shut my eyes and curl into the patio chair. It’s nice out here in the summer evenings, especially with my blanket, so I relax. My phone falls down the back of the chair and I don’t notice. I begin to focus on what I can see, and then the darkness turns to brightly lit networks of light and back into white noise once again. It’s the kind of white noise I’ve experienced plenty of times, but this time I see beyond those three stages and the pixels begin to organise themselves into clear images, moving images I’m certain I’ve never seen before, all changing and morphing before my eyes.

I see images of the three of us, me, Mags and Geoff walking through the forest. I see us baking cupcakes and I see us laughing in bed to jokes that only we’d understand, and all the while, Maggie’s face is the strongest. I think of tickling her upstairs and I realise that these are the moments I’ve been fearing the most, it being just the two of us. All this time, I thought, I’ve been afraid of future nights like these and I’ve been afraid of how sad it’s going to make me. But I was happy upstairs, even if it was transient. And in this moment here, right now, as I listen to the wind and I am hugged by Mum’s cable knit, it doesn’t feel so bad. In fact, it’s nice. I fall deeper into the chair and I enjoy a cartoon where me and Mags are at a tea party with the Cheshire Cat and then some while after, although I don’t notice, I fall to sleep under the moon.

The next morning, I wake to the sound of Maggie. She’s singing in a dull hum, the type of singing that makes me question whether or not she even knows, let alone cares if it would wake me, and she’s pouring her cereal into a bowl right beside my head. Yesterday, this would have probably annoyed me a lot, but when I look up, I smile at her,

‘Did you enjoy your cartoons with the Cheshire Cat last night?’ I ask.

‘Erm, no, don’t think so, I got tired after you went and fell straighta sleep. I don’t think he visited me this morning either,’ she replies. 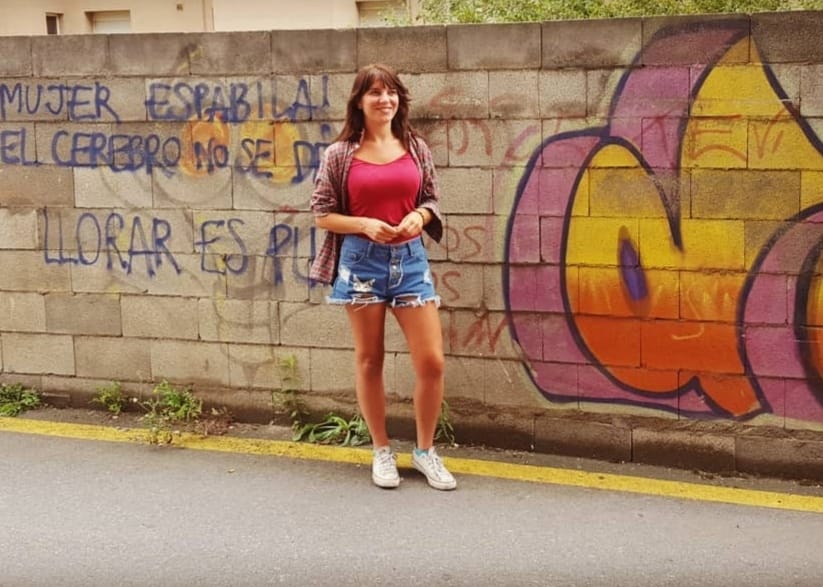 Sharona Kenwrick is a creative writer type who enjoys yoga flows under the moon, playing guitar badly, meditating, alternative music and all the other cliches that help to characterise this identity.

As such, she is currently working on a collection of short stories which explore the introspective moments of life, and are (hopefully) imbued with the calmness of the themes that she writes – such as mindfulness, music and nature.

View all posts by uobaloka